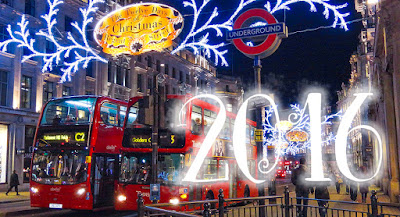 British comedian Michael McIntyre said something funny (which I've forgotten and Google wont help me) about when it becomes too late to say "Happy New Year". It probably is, but since I only just got back from my travels I'll say it anyway! Hope you all had a fantastic Christmas and are starting 2016 off on the right foot.

I spent three weeks in England which is the longest I've spent in the UK in some time and it made me remember how wonderful the UK really is. I also realised, for perhaps the first time, how fantastic London is.

This is what I realised about London... wherever you turn it's like you stumbled onto the set of Harry Potter or some Charles Dickens adaptation. The London Underground looks like a series of tiled Hobbit holes and they'll take you anywhere you want to go with a 2 minute waiting time. The food is outstanding and hugely varied, the people are wonderful and the museums.... free entry and probably the best in the world. To sum up - London = fantastic. Who knew?!

Recommendation - if you're in London, go and see the Celts exhibition they have there until the end of Jan 2016. It's the most exciting, exhilarating thing since Neil Oliver. Details here.

The year's round up - the highlights of my 2015. The year started in the US after I'd just returned from exhibiting some of my miniature sets in Shanghai, China. I started sculpting witch characters for  'Good Witches Bad Witches' and made a total of 10 whilst advancing the development of the project including concept sketches and a large illustration. More magazine features and an appearance in a book ('Curiouser & Curiouser' - published by CTN), Alice in Wonderland piece in exhibition at Center Stage Gallery, Burbank. I redesigned my Tall Tales Productions website (which you can see here) and joined Instagram to show my works in progress etc (here). I opened a print shop (here) and have sold many prints of my work including prints on T-shirts, tote bags and even iPhone cases. The year ended with a commission for a miniature model ark for a commercial, and this was something I worked on right up until I caught my plane home for Christmas! Shot to look like a 50 foot ark, I can't wait to share this project with you soon. In my personal life; a trip to the north of England for Easter, camping trips to Yosemite, breaks in Vegas and San Diego, Comic-Con, drawing cartoons about anything silly which comes to mind, and as you'd expect... more than one ball...!

Posted by Caroline McFarlane-Watts at 17:02

Email ThisBlogThis!Share to TwitterShare to FacebookShare to Pinterest
Labels: los angeles, my life, new year, news, round up

Ooh... I just LOVE your works - can't get enough off them ever. So thankful for you sharing them.
Happy New Year - may it bring many good things in your way :)
Hugs, Irina