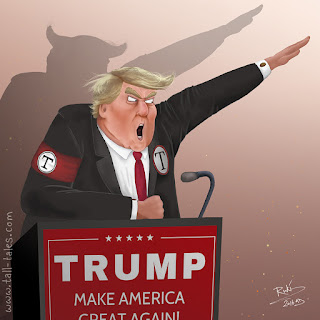 As an outsider, a Greencard-carrying 'legal alien' living in the United States, I get to watch the political debate in this country objectively.


This blog post does not reflect my political stance.


My cartoon is an attempt to capture the mood in the United States at present, and specifically the way these two politicians are, for the most part, viewed in the state I live in (Los Angeles, California).

I drew this cartoon and coloured it using Photoshop, as creating cartoons is still new to me and I want the practice playing with my tablet. It shows two politicians in the United States today, both vying for the position of President, and both so diametrically opposed to each other that this drawing practically drew itself. 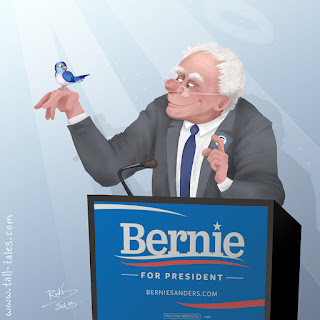 Many around me view Bernie Sanders as heaven-sent; an honest man with compassion, decency and plans to make health care a right - not a privilege, to reduce gun violence, resolve international conflicts peacefully, allow immigrants a path to citizenship, allow women the right to choose what they do with their bodies, address global warming by cutting US carbon pollution etc...

As Paul Waldman (The Week) put it -
"Sanders' supporters are idealistic, hopeful, and looking for dramatic change that is rooted in liberal ideology. They want more comprehensive government benefits in areas like health care and education, higher taxes on the wealthy, and greater restrictions on financial firms."

Conversely, the mood around me in Los Angeles suggests that Trump is viewed as a dishonest bully who denies global warming and has unrealistic plans and policies which belie racist and misogynistic convictions.


So I created this cartoon to put this mood to paper! The armband on Trump is because many compare his policies regarding immigration and religious intolerance to Fascism. The bird alighting on Bernie is in reference to a small bird which landed on his podium during a speech in Portland, Oregon, which got a standing ovation from his crowd.

For my non-American readers, if you're unfamiliar with these two politicians, Bernie Sanders is the likely candidate for the Democratic Party and Donald Trump is the nominee of the Republican Party, for the 2016 election. 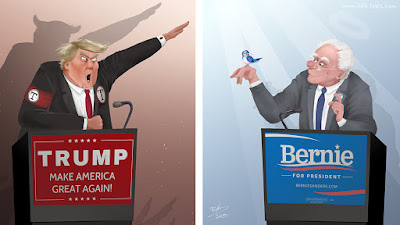 In other news, I have almost finished a new miniature witch character for 'Good Witches Bad Witches', and you may have caught some work-in-progress updates on Instagram and Facebook! Coming soon. 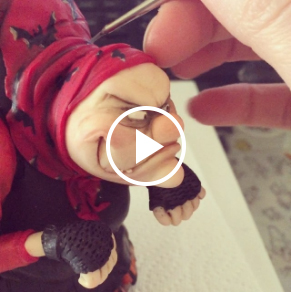