Close to the Edge 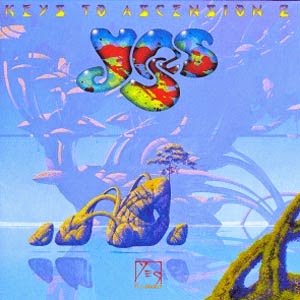 If anyone who reads this blog loves progressive rock as much as I do, you'll appreciate how chuffed I was to spend last night at the Greek (brilliant open-air theatre built in 1930 in Griffith Park - within walking distance of my house), watching Yes perform. I used to listen to Yes constantly throughout my teens and through university. The performance was just fantastic. (If you don't know Yes then I insist you listen to this (YouTube video)

The album art for Yes is wonderful - created by artist Roger Dean - his website is here. The image on the left is from the album 'Keys to Ascension'.

Photo below is one I took at the Greek of Yes performing.

The previous night was my talented artist friend Nico Marlet's birthday party (I've shown some of his artwork on this blog in a past post here), so I made him a miniature birthday cake with candles of about 1 mm in diameter and 5 mm in height.

It was the least I could since he had recently drawn me meeting one of his famous dragons! Scroll past the photos of the miniature cake to see it, click to enlarge. I adore this drawing of me because he had been looking through some of my past miniature work and liked my crows, pumpkins and snails, so he put them in the drawing! He even got my signature 'humbug' dress in there... 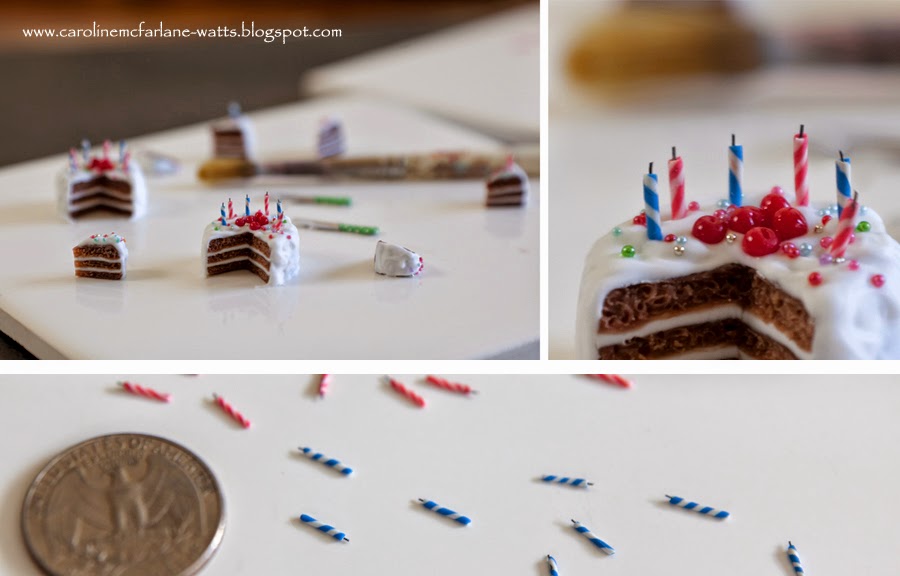 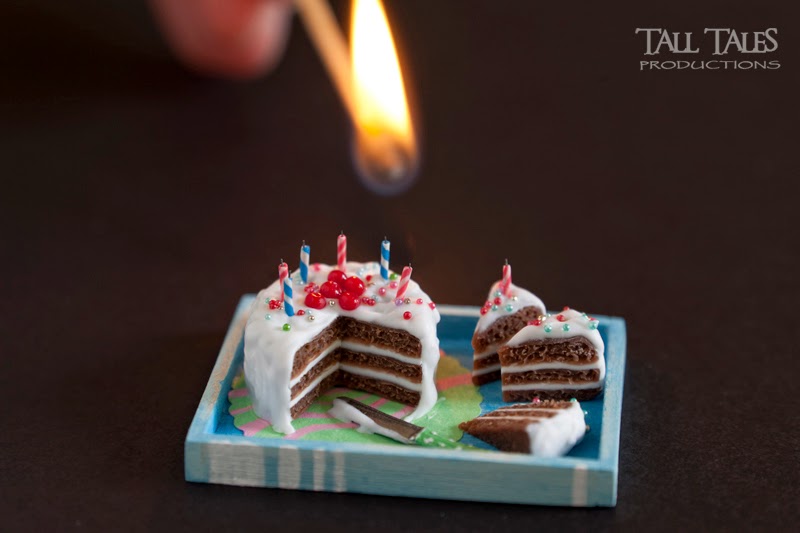 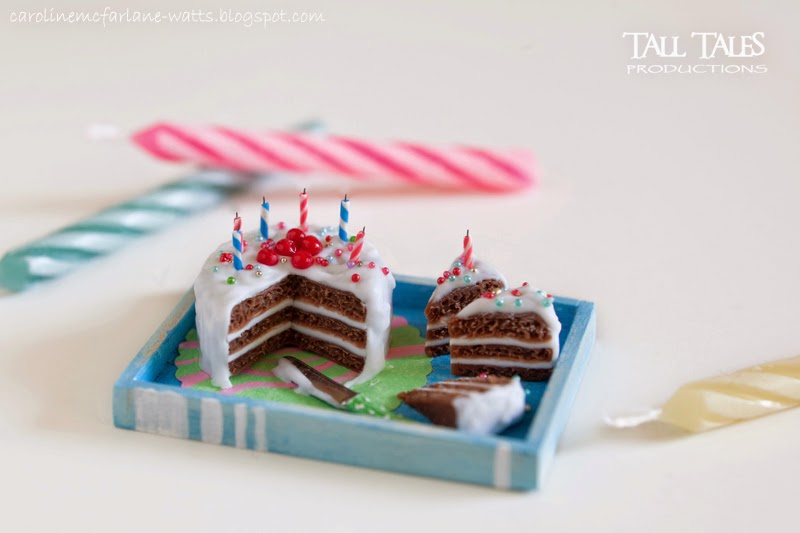 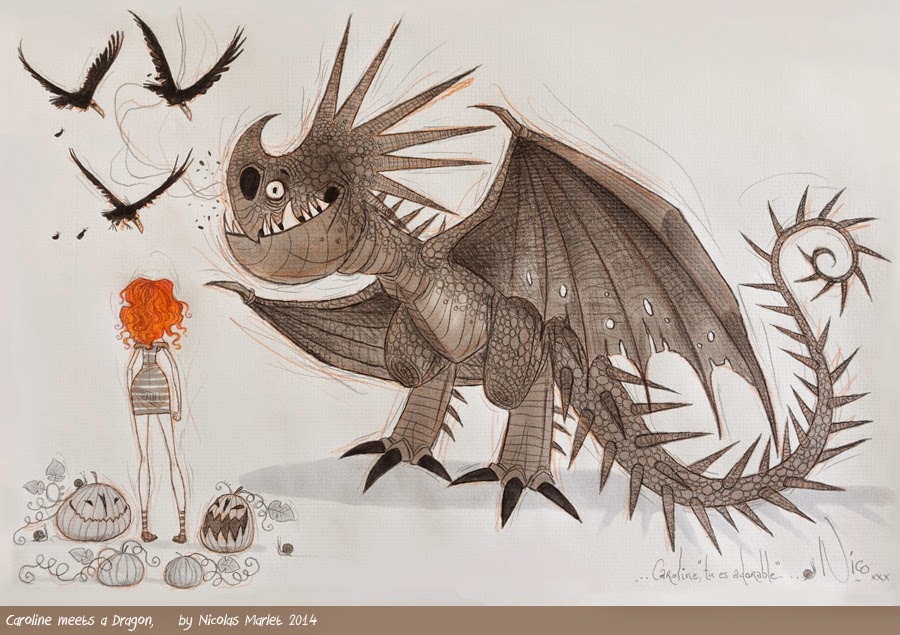 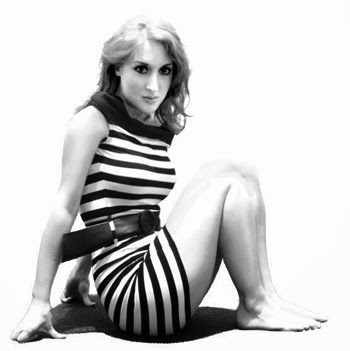 Posted by Caroline McFarlane-Watts at 19:15 2 comments

As the Crow Flies

That last magazine feature is wrapped up and submitted, so now I have only to finish two others and start on some new commissions which came up whilst I was back in Blighty for my sister's stunning wedding. (I just got back on Monday). When that's died down I'll show some Myrtle artwork...

For those that saw my last post here about the scarecrow / crow king project, here's just a couple of photos from the final scene. I've included a scan of my initial sketch as well.
Everything in the scene was created by me in 1:12 scale. The scarecrow has a pumpkin head which is polymer clay, whilst his body is raffia, horsehair and craft straw over a wire armature. I dyed and stitched his clothing to him and used hairspray to set it. The crows are clay, wire and real feather. The field and hay ricks were made using raffia and twisted tree stumps from wire, paper clay and other mixed media.

On a less related note, some people have asked me the meaning of the title of the last post. A 'murder of crows' is simply the collective noun for a group of crows. Other examples are; a parliament of owls, a gaggle of geese, a flamboyance of flamingos, a colony of penguins and a clamour of rooks. Interesting isn't it? Stop and think before you next utter the words 'bunch of birds'...!

As usual I'll update my 'publicity' section with the magazine feature when it's out. 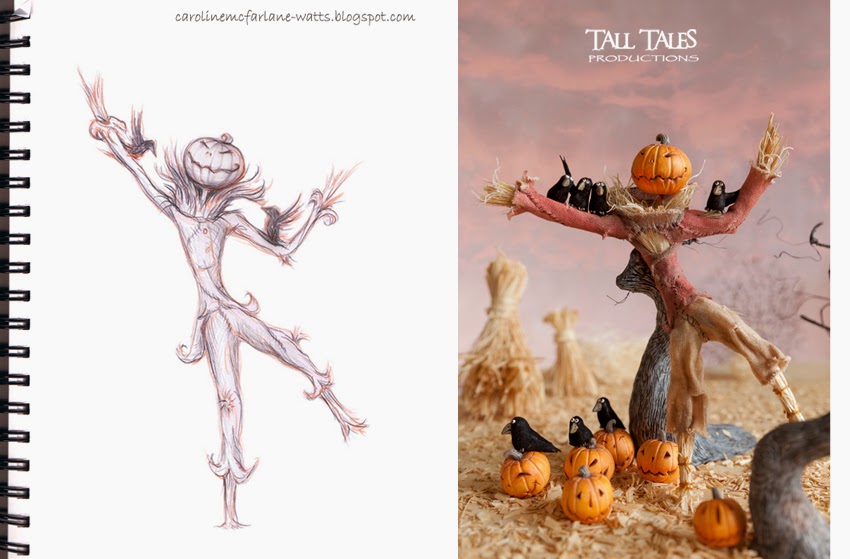 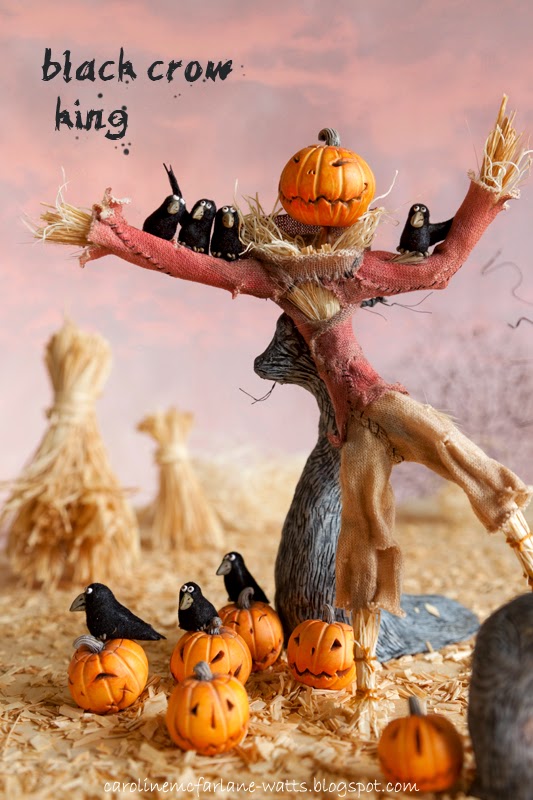 Posted by Caroline McFarlane-Watts at 14:46 1 comments