An English Village, Hopping the Pond and a lot of bread...

From one film hub to another - I've just moved from Hollywood to Turville - *the* location most filmed in Britain. Flew across the pond from California to the UK with no less than 9 suitcases in the first week of this month. (Don't call my US cell btw... getting new UK phone soon).

With a population of 100 people (including actor Orlando Bloom who owns a house here) Turville has been used to film many movies and TV shows, including: 'Chitty Chitty Bang Bang', 'Little Britain', 'An Education', '101 Dalmatians', 'Goodnight Mr Tom', 'Pride and Prejudice', 'Bride & Prejudice', 'Midsomer Murders', 'Jonathon Creek', Miss Marple'... the list goes on and on. I worked as a runner on set here when I was 16. Met Sam Neill ('Jurassic Park') on his birthday when he was filming here and had a slice of his cake. ;)

Anyway... my updates...
I am focusing on my short film (ish) whilst enjoying being back, eating English pub food and racing through commissions. Amazing what people will order - just completed a commission for 150 miniature baguettes in one inch scale for a woman in Paris. (See photo below).

Below are pictures of the English village of Turville. 16th century brick cottages, 10th century stone built church and a pub named after Henry VIII at the time he executed Anne Boleyn. 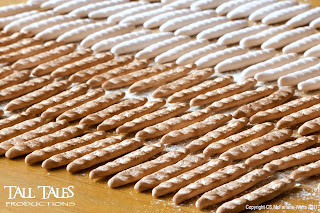 And here's some pics of Turville.

Posted by Caroline McFarlane-Watts at 10:35

o what a beautyfull mini items and miniatures you make!!! You have a pair of golden hands!!!
greetings Petra