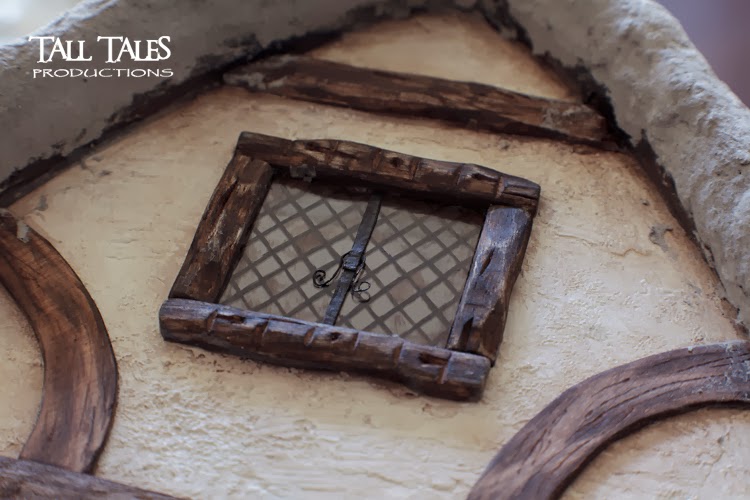 It was months ago that I finished creating the miniature 1:12 scale cottage. When I can get the time I'll finish the terrain beneath it (wire mesh and plaster). More about that in a few days.

So here are some photos I took along the way last year. The roof was finished with Celluclay (I'll upload a video demo of that to Vimeo soon), I painted and textured the thatch, put in lattice windows and added moss and aging on the thatch and up the walls.

This is of course a whimsical fairy tale interpretation of a little English / Welsh cottage and is not historically accurate. It has the things you'd expect - it's cruck-framed, has thatch, oak timbers, wattle and daub walls... but then it also has things that would have been utterly inaccurate for the time, such as a stone base, chimney and glazed windows. If you want to know why those things would have been impossible then read my little history lesson about late mediaeval / early Tudor cottages below.

------
Building in the Middle Ages
A thatched cruck-framed cottage built in the late mediaeval era (1400s / early 1500s) would have been constructed with an oak-frame and the walls made up of wattle and daub, then white washed with a lime plaster. (Wattle and daub was the way to build houses even into early Tudor times as stone, brick and even wood was expensive. Wattle is the mesh you made first with tightly woven sticks such as hazel. Daub was the 'cement' mixture you applied in damp workable balls known as 'cats' over the top. Daub was made of a mixture of clay, dung and sand mixed with straw, hair and flax to bind it.) My family home in Oxfordshire was built in this way in the 1500s. So far my cottage is accurate - apart from the stone I added to it.

A chimney would never have been seen on a tiny modest cottage. Chimneys were invented in the 1100s but were only for the extremely rich. Before this time the rich had braziers which were iron 'baskets' to hold fire and they stood in the center of rooms / great halls below a hole in the roof to allow smoke to escape. So, chimneys were not the norm even in modestly well-off houses until half-way through the reign of Elizabeth I when the affordable production of fireproof chimney materials meant you didn't have to use scarce stone. Chimneys became possible for the very well-off and allowed people to build a second and third storey to their houses. A chimney was a prime status symbol. My tiny cottage would have had an open hearth in the centre of it's one room and a hole in the thatch for the smoke to escape.

Fast forward another 40 years towards the end of Elizabeth I's reign and you'd start to see glazed windows - the new and very expensive way to show off to the neighbours. The poor - certainly anyone who lived in a packed-earth floor dwelling like my cottage would still have had small windows (holes in the wall more accurately) with greased paper / cloth or animal hides to allow in a little light whilst keeping out draughts. There's no way it had glazing!

But my whimsical cottage is coming from Tall Tales after-all...
------

Lecture over. Take a look at some work in progress photos below. I'm busy on a commission these days but will make sure I update this blog again in a day or two with the making of the front door and other things...

Past links about this project:- 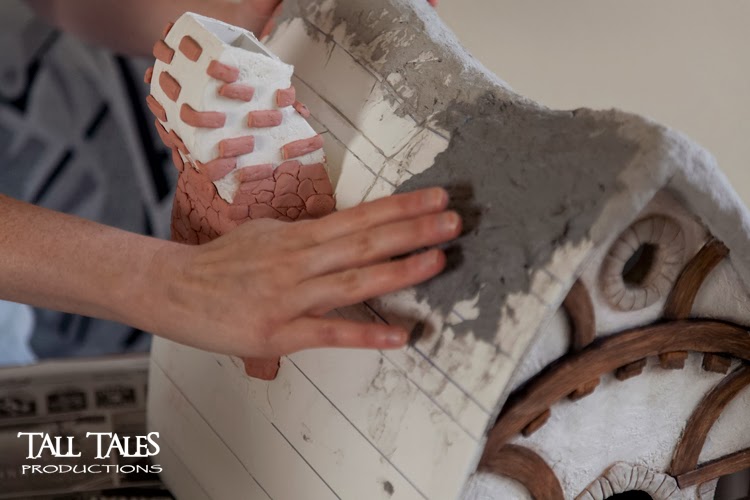 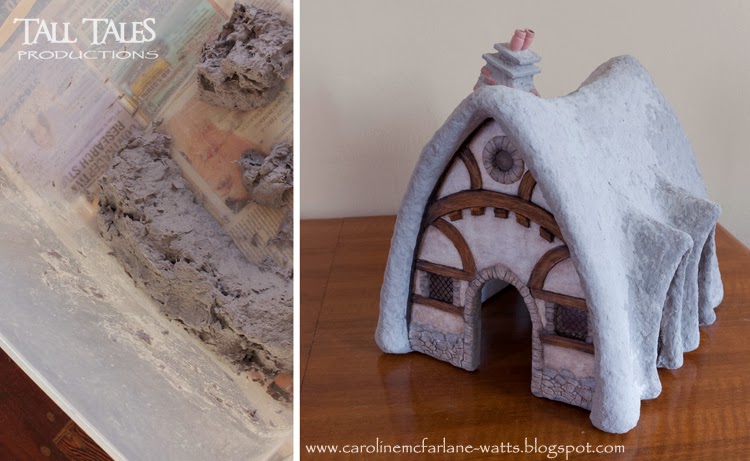 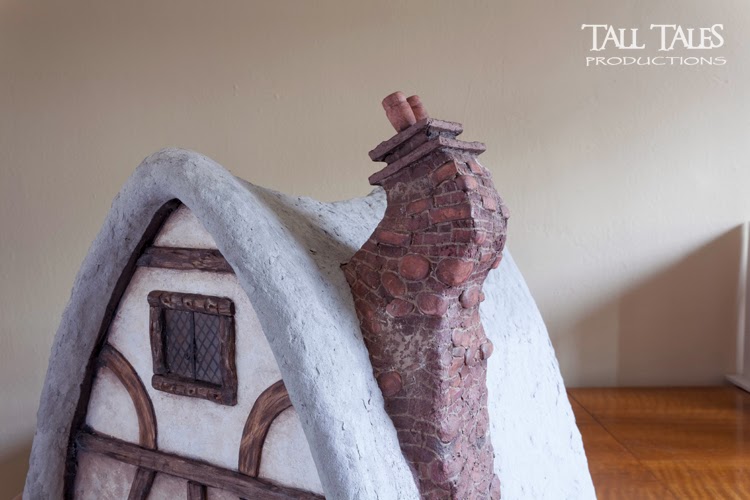 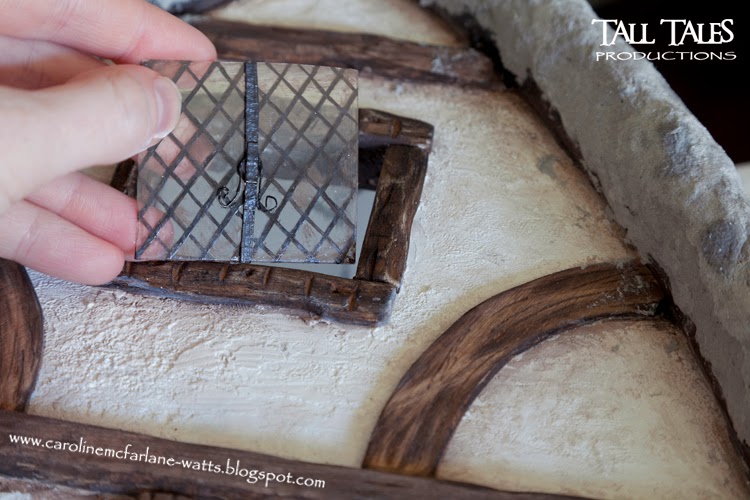 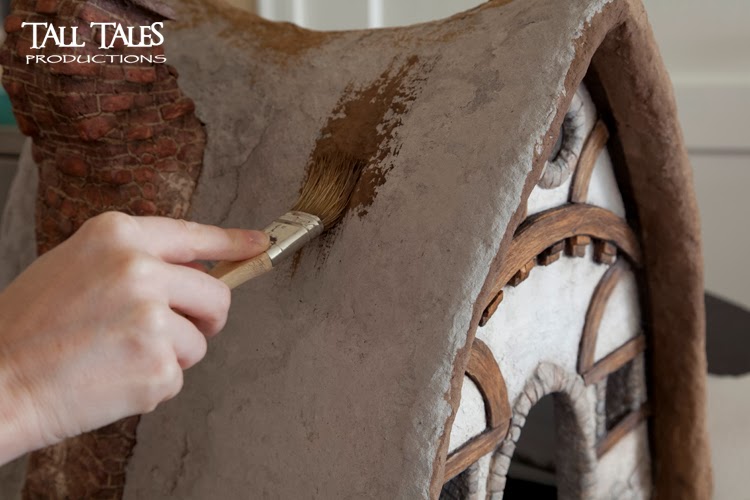 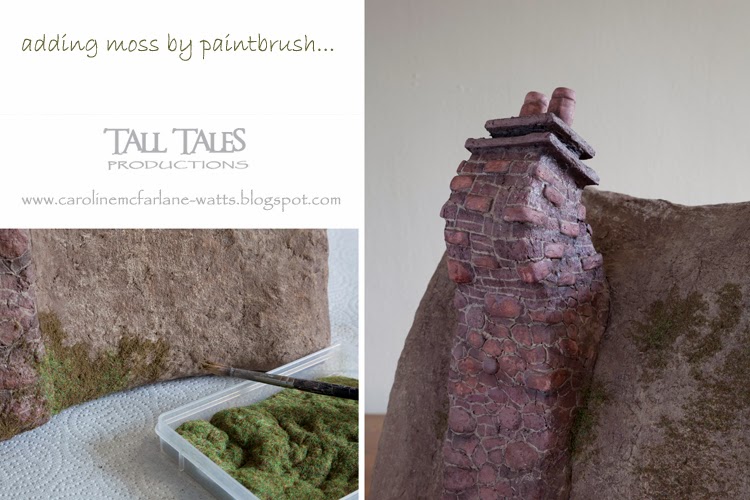 Posted by Caroline McFarlane-Watts at 15:29

Thanks so much Elizabeth! In case you didn't know, I'm releasing a book this spring with more about this cottage and various how-tos, so look out for it. :) Thanks C