Creating the starry skies for my Greek witch (previous post about her here) made me think about Eilmer - a monk who lived in England over a thousand years ago, and who loved to gaze at the stars.

Quick history lesson - feel free to skip this section if you're 'only' interested in sculpture / miniatures / filmmaking! ....
Eilmer was special. Living in Malmesbury abbey in the 11th century - at a rough time when Viking raids happened around him, the inquisitive and visionary Eilmer did two things that others had not before. Studying the skies with a scientific eye, he was the one to note that if you lived long enough you could see a comet come round again.*
He was also one of the first to fly. Perhaps inspired by the Greek stories of Daedalus and his escape from the Labyrinth using wings fashioned from wax and feathers (which we know Eilmer read), Eilmer created his own wings using willow and parchment. He climbed to the top of the Saxon bell tower and jumped, gliding 200 meters before crashing and crippling both his legs. He lived to old age, recalling his flight adventure "and explaining the failure of his great enterprise with wry humour. It was his own fault, he would say. He forgot to fit a tail to his hinder parts."*
...... 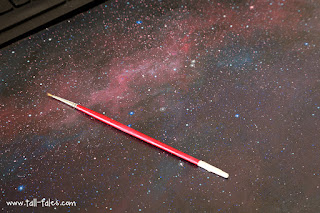 I painted the starry skies for my astronomer witch on particle board using first chalkboard paint (nice and matte) and then flicking acrylics using a toothbrush. Not my current toothbrush. That paint never comes out.

Watch the process of creating the witch here at my new little video at my Tall Tales Productions YouTube Channel.


Also, since you've been requesting it, I will be making prints and posters of this scene available at my webshop here very soon. Please feel free to email me directly if you want to reserve one.

The Greek witch with her starry night skies 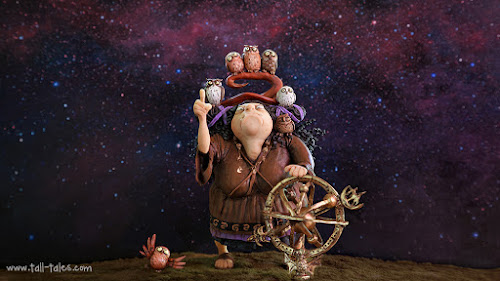 Finally, in my Southern California adventures, I finished up the Greek witch and then flew off to San Francisco in my friend's plane. Flying in a little Cirrus is exhilarating - partly because it's so damn unsafe and I often wonder how close I am to death on take off and landing (despite the pilot being an exceptional one), and also because I can sit right up with the controls and marvel at the flying machine that it is. I wonder what Eilmer would think if he was sitting there with me.

Here are some iPhone snaps of my mini break in San Francisco and the flight over! 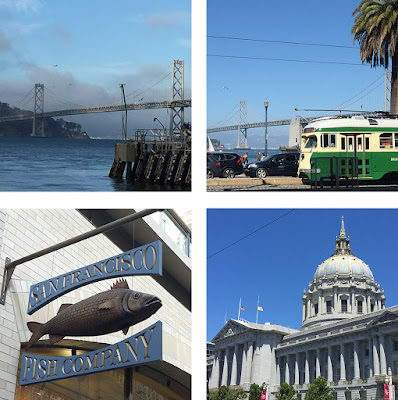 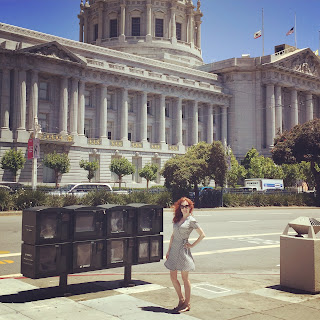 * Words about Eilmer the monk taken directly from Robert Lacey's absolutely brilliant book 'Great Tales From English History'. If you only ever read one history book in your lifetime - let it be this one. If you have no interest in history - this will change your mind.
Posted by Caroline McFarlane-Watts at 22:02

*Sigh* I am left both joyful and wistful. Wistful as I should like to fly. (I fear more so like your monk. I love small plane flying). Joyful for the lesson and your art. I shall search for Mr. Lacey's book. Thank you Greek Witch. I am richer for having met you.

Thank you for that lovely comment Tracy. You'll love the book, I know it. :) xx