Designing and building the Workshop 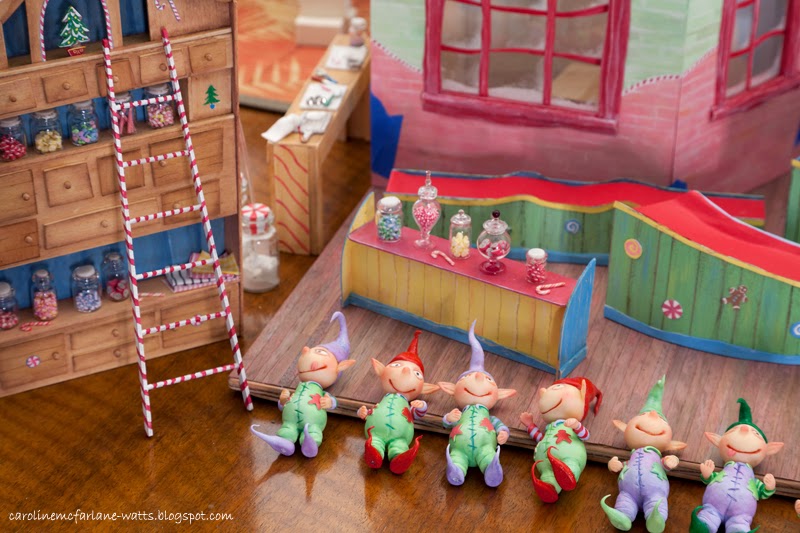 Because people always ask to see photos of the process, I now take 'making of' photos much more frequently.

The last big piece I made (which is currently being exhibited at Creature Features, Burbank), is the 'Father Christmas Workshop' (US English - 'Santa's Workshop'). Here are some work-in-progress photos for you.

Check back here (or the Facebook page) in a few days for a 'making of' the other furniture and the elves.


In a nutshell...
I always start by doing a few quick sketches. (Might want to right click and open the image in a new tab, so you can zoom). You can see below that I hadn't decided if it would be elves making toys (like rocking horses and dollhouses) or if they'd be making gingerbread houses and confectionery. Ultimately I knew I didn't want Father Christmas (Santa) in the scene, but I did want a conveyor belt and several elves. After a few drawings I decided to add a window with an outdoor scene, a tree with lights and a large kooky Welsh dresser (hutch) on the back wall. 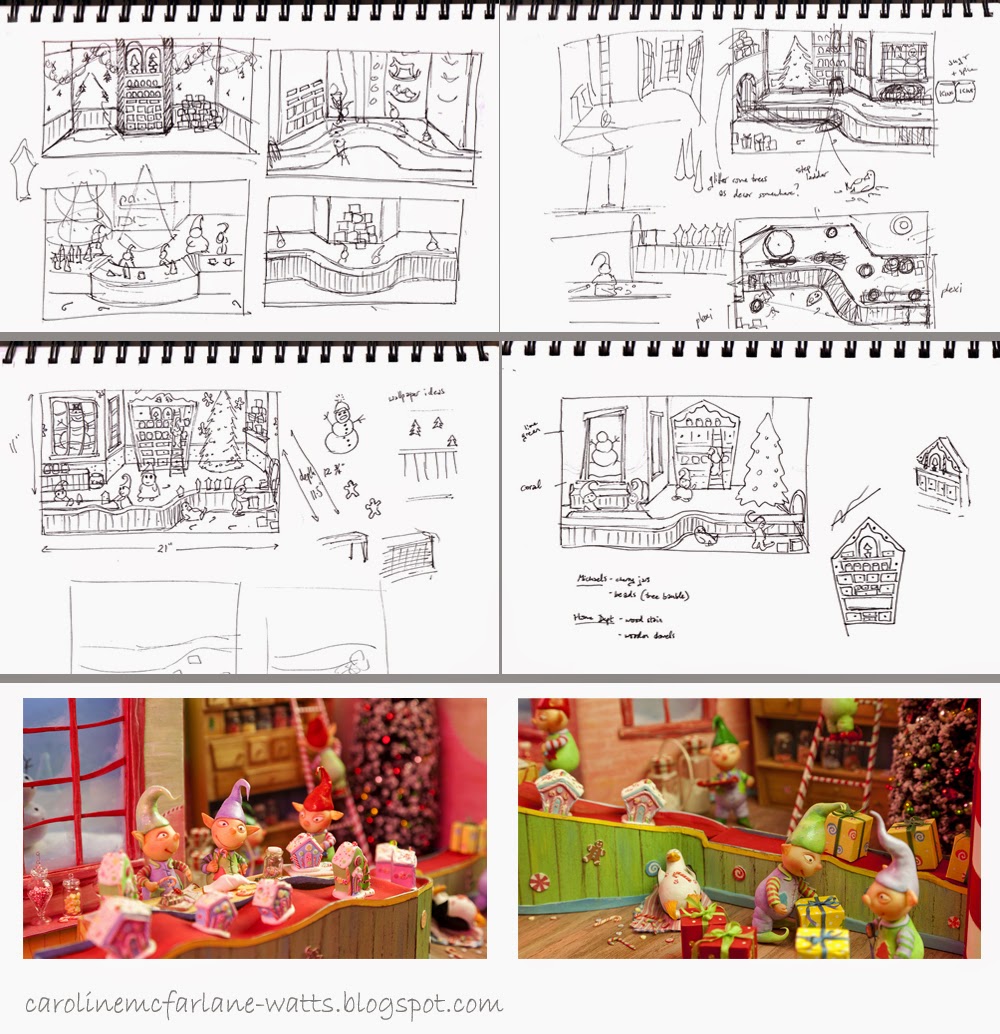 Here's a basic step-by-step. I started with some large plywood pieces and used scratch paper to plot the basic size and shapes in the scene. Then when I knew what the measurements would be, I cut the wood and assembled. The windows were cut out and whole scene painted with a white base coat. The walls of the main room were finished and floor laid. Then it got more interesting. The 'outdoor' scene was created with wire mesh, plaster of Paris and paint. It needed to light up (so that you could see the outdoor scene, and it would look like daylight outside the windows), so I created a frosted perspex ceiling with a string of LED lights above it, to cast a soft even light. The snowman was attached to a dowel that came from within the plaster of Paris snow mound. Coloured lights were also added to the tree (whilst all cables were completely hidden).
The windows were made (more on that below), outdoor scene was finished by nailing and gluing those inner walls in. The candy cane columns were put in, the furniture glue-gunned down, and the removable perspex (Plexiglas) display case added.

I used wooden dowels as candy cane columns. They were first painted white, then I used masking tape to stencil over the pink/red stripes. The wooden floor was laid and painted with a mixture of pinks and blue washes.

I wanted the windows to be off kilter, like the furniture I made, so I cut basic straight holes in the walls, but then made the window frames wonky. The frames were cut using a Stanley knife (X-Acto blade) and I carved and sanded the edges into fun wonky shapes. The wood was basswood. I used epoxy to attach the perspex 'glass' to the back side of the windows. The frames were painted red-pink, then dry-brushed with white and the glass 'panes' were frosted. I added scenic scatter snow to the outside window ledges, and finished the other side of the walls with brick texture (not that it's easy to see it through the window).

The furniture was made using basswood and paints. This shelf has hand-blown glass jars (made for me by a glass blower in NY) filled with candy I made using polymer clay.

The conveyor belt was harder to make than perhaps it looks! I wanted it to be off kilter, again, and so it meant making it first out of paper, and adjusting the design until it felt right. I took the paper one apart and used the pieces as templates to create the shape with foam core, basswood and heavy cardstock. It was a fun challenge making the 'slide' part for the gingerbread houses to drop down onto a lower section of conveyor belt. I also made the top of it curve up and down so that the gingerbread houses would get a bumpy ride. The final details were simply painted onto cardstock, cut out with tiny scissors, painted with paper glue mixed with hologram glitter and attached.

Stay tuned for the making of the elves and other furniture...!
Posted by Caroline McFarlane-Watts at 11:52

Your Christmas workshop is a Work of Art Caroline! It is totally charming and it is so interesting to see the process as you develop it and transform it all along the way. Thank you for sharing it. You get two thumbs, Way Up, from me! :D